Sometimes the best ideas for a story come from the classroom.

A couple of weeks ago I was delivering the first Isuzu I-Venture Club program for 2022 and back in my home State of South Australia. Whilst we were talking through the section on tyres came this gem, about what tyre pressures should be applied to a caravan.

Now, on the face of it, this shouldn’t be too hard to unpack, as I assumed that weighing-in at 2,500kgs ATM, it was going to be a tandem. Errr, wrong.

It’s a single axle, which made my eyes light up, because I knew the tyre pressures were going to be stratospheric.

So, my correspondent on this, let’s call him Sid, just about needed a Bex when I told him how much air per tyre was likely needed to carry that heft.

For you, young things, who aren’t familiar with a Bex, it was an analgesic powder containing equal parts of aspirin, phenacetin and a dash of caffeine, and a useful pick-me-up for Aussie housewives during the 1950s-1970s. The phrase “Stressful Day? What you need is a cup of tea, a Bex and a good lie down”, was told all over Oz back in the day. Oh and it was addictive too, just like 4WDing!

Plenty of you I imagine have been splashing the cash on new campers and caravans so I thought this info might be of interest to you too. So here’s the email correspondence chain between us…

Thanks for a great day (Sunday 6th) at Eagle View.

Took your advice and dropped the tyre pressure on the mighty 20-inchers to 30psi (Sid owns a 2022 Isuzu MU-X with 20” wheel combo and they were set by the dealer at 40psi). What a difference – handled better, more comfortable and we did 10 kms on corrugated dirt. It was like driving a different car!

Would you mind checking the correct pressure settings for us?

Glad to hear the advice on the tyre pressures had some value on the MU-X. The 210kPa/30psi value has been a good all-rounder for me on the bitumen for most medium sized 4WDs I have driven in the recent past (D-MAX and MU-X included), that are either unladen, or carrying a modest load, and useful for end-of-day’s proceedings to get you home quickly.

However, you’ll remember that I said you need to use the vehicle’s placard for day-to-day, as it is the optimum pressure for the weight of the vehicle in its anticipated use. From memory, new MU-X is rated at 230kPa/33psi. Use that for all your future bitumen work.

Set at the pressures you arrived at for the course on Saturday, they were obviously too high and that will contribute to tyre failure on the gravels, as well as all the discomfort you’ve observed. Expect extended braking distances and prematurely worn tyres on top of that. Set at the placarded recommendations will reward you with far greater prospects.

Now, to the question of your van… what I’ve discovered is pretty scary!

As your van is only a single axle arrangement and the weight is relatively high, your current tyres are on a knife-edge with no redundancy spare.

In the accompanying chart you’ll see the corresponding pressure/weight requirements for that sized tyre. At 2,500kgs, divided by two wheels, the individual wheel loading is 1,250kgs, which is the maximum carrying capacity of an LT235/75R15 116S. You’ll remember in the classroom I recited my ‘120’ Rule for future tyre fitment to a 4WD and doing the same on a trailer or caravan is smart too.

That ‘120’ load index tells us the tyre will carry 1,400kgs at maximum pressure (again usually 550kPa/80psi). But the difference is it has extra carrying-capacity compared to the 116, not much, but in this exercise every bit helps.

If you had a van with tandem axles, the load per tyre would change dramatically, from 1,250kgs per tyre to 625kgs and at that weight, the same tyre would need only 250kPa/36psi or less (you’ll see that in the first column stating 710kgs at 250kPa).

This all presents a major conundrum as the 15” wheel/tyre package presented on your van is at its absolute maximum.

I don’t think you have anywhere to go in 15” to improve on the situation.

If it had been designed for 16” it might have been different. I see a fair few camper/hybrid/caravans with single axles running LT265/75R16 123R, which has been one of my favourite sizes in the past on my old D-MAX and Rose’s MU-X, because of its 123 load-index = 1,550kgs. That tyre, with your load, needs only 400kPa/58psi, a much better proposition and with 300kgs in reserve.

I’m not sure whether a simple wheel and tyre changeover could be enacted in your case, because there is a substantial difference in the diameter of these two fitments, the 15” is 740mm whereas the 16” is 810mm, that’s 70mm difference. With the van’s standard height suspension, the larger diameter 16” may not fit under the guards with sufficient clearance, nor might it be desirable, because that will put an extra 35mm under the axle raising the height of the van and possibly uncomfortably so, for things as mundane as climbing in and out.

It’s not the first time I’ve seen this, where caravan manufacturers deliver the barest minimum tyre to get the product out the door. Whilst they’ve likely satisfied a legal requirement to get a tyre on there that matches the ATM, they are overlooking the fact that many people overload their towed vehicles, either by design or ignorance, and that’s when trouble occurs with a major failure or crash.

The data I use is from Industry, a journal called The Tyre & Rim Association of Australia Standards Manual, THE bible on tyres and used (most times) by informed tyre fitters and other interested parties. Isuzu would have used an international equivalent of this manual in concert with their tyre supplier, to arrive at the placard recommendations seen on your car. No dispute it is a legit document.

Hope that helps you form some more informed thoughts!

Thanks for all the information Dave.

Much as I expected.

Not really comfortable towing at maximum load ratings, especially at 80psi – the van would probably shake to pieces!

Am checking out 16-inch replacements – think there is ample space but will check further. 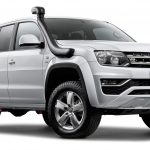 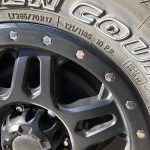