To tune or not to tune, that is the question, and it’s that very question that I’ve been grappling with as our Project Triton build wound down. Thankfully, being the procrastinator that I am, I ended up just going with the flow, and no decision was required.

Late last year, Mike from Pacemaker Headers not only insisted that I take a factory tour, which was an incredibly interesting way to spend half a day, but that I also fit one of his beautifully made King Brown exhaust systems to the Triton. He had a hunch there’d be a story in it, and his good mate Brett West (diesel tuner extraordinaire) was keen to prove up Mike’s hunch and amp it up with some magic of his own. So, without further ado, let’s see what Brett has to say about dynos, exhausts, ECU tuning, and tuning Triton’s in-particular.

Most of you will have seen a dyno graph before, and more than likely looked straight for the peak output numbers, checked the profile of the curve and probably only half-understood how it all works. The first thing to understand is that some dyno figures can easily be fudged.

If a dyno operator wants to show an exaggerated torque output, then they can do that in seconds, simply by altering the derived RPM calculation when using roller speed to calculate torque. Next time you’re looking at a dyno sheet that is being used to market a product or tune, understand that it might not be accurately representing the real world result your money will buy.

Not all dynos are created equal, so comparing the figures spat out by one dyno to another is often a pointless exercise. What you need to be looking at are the gains achieved between dyno runs on the same dyno, not the peak numbers.

Have you ever wondered about those huge torque figures that some dyno sheets show? Well, that’s a Total Torque figure which is total raw torque from the rear wheels plus total raw torque from the front wheels, in the case of AWD/4WD vehicles. So, in our case, the 687Nm Total Torque figure showing for the Triton’s 2.4-litre turbo-diesel is just the torque applied to the dyno load cells by the wheels in the selected gear. It is directly relevant to diff and gear ratios and clearly not relevant to flywheel torque, even if it does look real sexy on the dyno’s LCD screens.

Derived Torque is the one to look for on the dyno sheet, as it’s a measure of torque from the flywheel after driveline losses. Total Torque will get much higher as lower gears are used whereas engine rpm Derived Torque will stay much the same through all gears.

Imagine your legs are the engine’s flywheel and you are on a mountain bike, about to start on a gnarly climb in top gear from standstill. Unless you’re the Hulk it’s going to be difficult to get moving, however, if you change into first gear, your skinny little legs will get that bike flying up the hill easily. Your legs (the flywheel) did not get stronger, but the torque at that back wheel multiplied massively when you changed gear ratios, from top gear to first gear.

The Raw Torque on the dyno is what is measured at the bike’s wheel, and the Derived Torque has your leg speed (flywheel speed) mathematically calculated into the result, so you now know torque at the wheel and the torque from your legs (the flywheel).

Both are accurate, and both are useful, especially when tuning an auto transmission equipped vehicle but the torque many dyno operators print for their customers is the Total Torque (raw torque) figure, because it’s significantly larger albeit misleading as it’s not a measure of the engine’s output.

The engine speed data required to calculate Derived Torque can be sent to the dyno by an OBD link, CAN BUS communications or a hard-wired tacho pickup and all methods provide an accurate engine rpm figure for auto and manual transmission vehicles. It all takes a little longer to hook up, but the outcome is sweet for a tuner wanting ideal results although not all tuners have this equipment or the desire to use it if they do.

As far as the actual tuning goes, tuning turbo-diesel engines from a layman’s perspective is all about adding air (increasing boost) and fuel, while maintaining a preferred air-fuel ratio (18:1 for the Triton at ADT) in a dance that is governed by exhaust gas temperatures or EGTs. In the Triton’s case, a safe upper limit for EGTs is typically up to 630 degrees Celsius depending on the place of measurement and time kept at that temperature. Out on the road, you’ll find the Triton’s ECU starts to get serious about pulling the pin (cutting power) if the exhaust gas temperature hits 650 degrees Celsius and hangs around there for more than a moment.

Fuel, air and temperature are the holy trinity of turbo-diesel tuning, and while that sounds simple, there are a whole bunch of other factors that come into play and a lot of R&D expense is soaked up creating various levels of tunes for each vehicle. So, while it might take 15 minutes to flash a tune while you’re standing there, all you’re seeing is the tip of the iceberg and the many benefits of time spent before your vehicle arrived.

We’ve tuned the Triton’s 4N15 turbo-diesel before, but this was the first time that we’ve had the opportunity to add a DPF back 3-inch exhaust into the mix. We undertook four dyno runs with the results turning out as follows:

The big takeaways from this exercise were that a larger DPF back exhaust, contrary to popular belief, makes a considerable difference in the Triton’s case, with a 12kW and 16Nm increase in outputs and importantly, a significant drop in exhaust gas temperatures across the rev range. The stage 2 and 3 tunes take it from there, increasing outputs further and cooling EGTs further until close to the engine’s redline.

There is clearly considerable restriction in the Triton’s factory exhaust system, down the line from the DPF. This isn’t the case with all DPF equipped vehicles that we’re tuning, but our R&D is proving that some popular models benefit from a DPF back exhaust and that some DPFs flow well enough to make a DPF delete a waste of time. We’ll reveal more about all of that as this series of articles unfolds.

The team at All Diesel Tuning have seen most everything and consistently endorse Pacemaker’s King Brown exhausts as to put it simply, it’s a product that has a brutal advantage when it comes to flow, fit, bulletproof manufacture, tone without the drone and the ability to bolt up perfectly every time. Their exhaust systems aren’t the dearest nor are they the cheapest but they are up there with the best and buying one helps to keep people employed right here in Australia, so like they say, ‘book them out’ and everyone wins.

For the DIY exhaust fitters out there, you’ll find that good quality Australian made exhausts like the King Brown bolt straight up, and that’s not always the case with the cheap imported stuff.

If you’re driving a real 4X4 that will see real tracks and Outback roads, then the cheap rubbish shouldn’t even be on your shopping list as it’s simply not made to deal with Australian off-road conditions and it generally lacks the Nationwide premium support that you’ll get by buying Australian made.

Okay, you’re back with me (Steane) now, and I’ll do my best to describe how the stage 3 tune and upgraded exhaust have changed the Triton. The first thing I noticed was that the engine was quieter under load with reduced diesel-clatter. The mushy throttle has gone as has much of the Triton’s well documented lethargic off-the-line performance.

My seat of the pants accelerometer tells me that mid-range punch is where the big gains have been made and I reckon that and the reduced EGTs are going to make towing the boat easier than ever. If you’re in manual mode and not mucking around, it’ll punch through each ratio with considerably more aggression than it did pre tune. It’s also holding higher gears for longer, on sections of road where it used to change down and get a bit thrashy.

Fuel efficiency around town seems to have improved by around 10 percent with a consistent 10L/100 dropping to 9L/100 and the improvement may be larger than that, as you know, there’s been some spirited test driving to undertake. 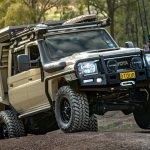 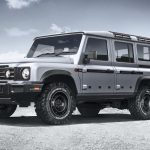